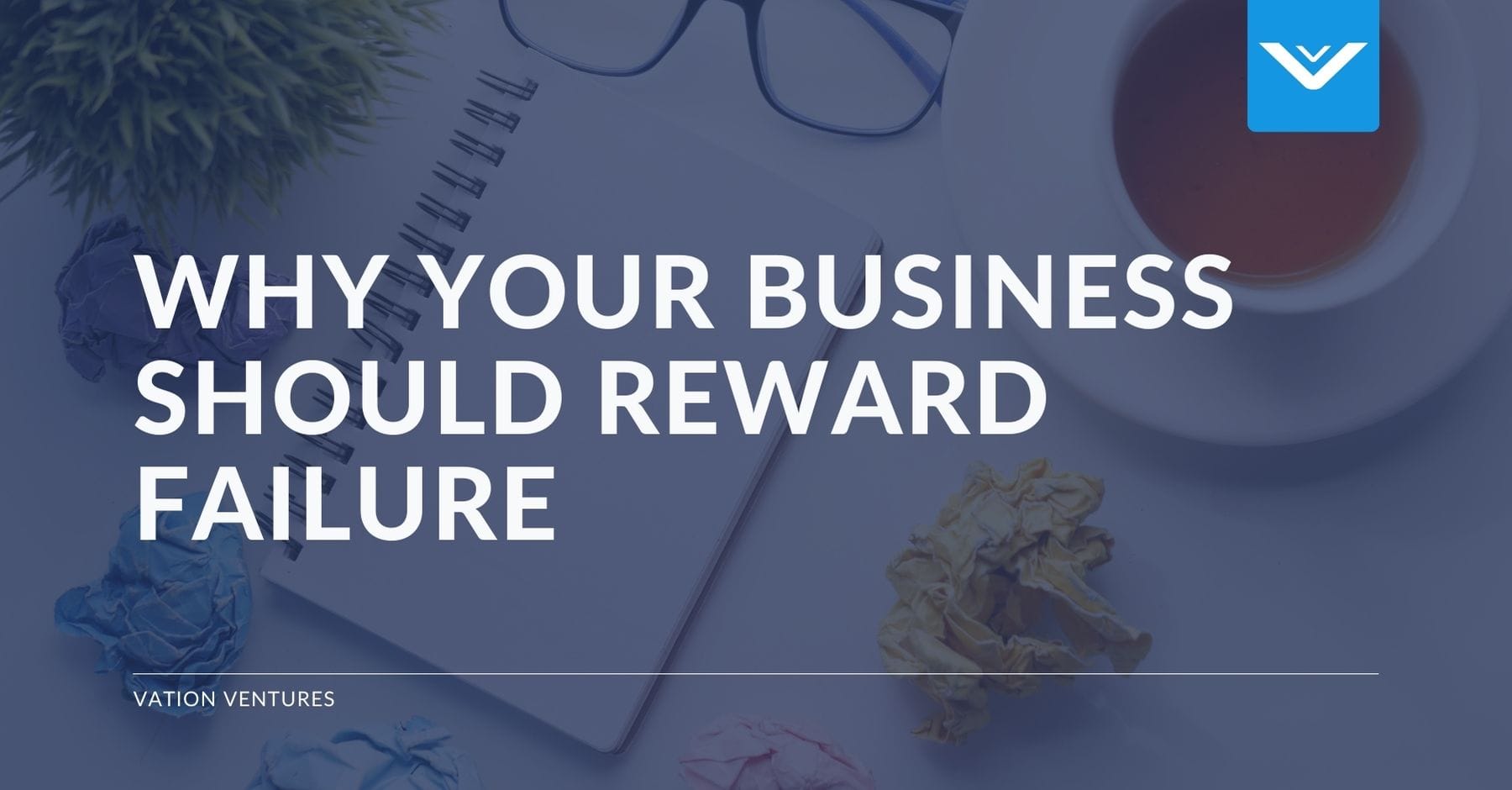 Why Your Business Should Reward Failure

Companies are more likely to innovate if they provide an environment that encourages risk-taking and compensates people for trying out new approaches, even if they don't work.

“If there's one piece of advice I can give you about how to promote innovation, I'm going to say go today, tomorrow, and reward failure.” - Vijay Panati - Deputy CIO Los Angeles County Probation Department

People are congratulated and rewarded for achievement in personal and professional settings, which fosters a system where people may not learn from their failures. As a result, organizations no longer place a high value on innovation, and you run the risk of making the same mistakes again. The Silicon Valley mantra that failing is a good thing doesn’t need to stay there. This culture can be adapted to any organization with the right systems, behaviors, and structures in place and create a workplace of happier employees that just might think of your company’s next big thing.

Companies are more likely to innovate if they provide an environment that encourages risk-taking and compensates people for trying out new approaches, even if they don't work. It takes a lot of work to learn from mistakes, and admitting defeat isn’t easy for most people. So, motivate your employees to take calculated risks by rewarding those who fail. Here are some reasons why rewarding failure is a good idea in business:

Taking the Fear out of Failure amongst Workers

There is nothing new about rewarding employees for innovative and profitable initiatives. Nevertheless, a small number of businesses are turning the traditional business model on its head by applauding setbacks to stimulate more creative thinking. Numerous organizations enable employees to spend between fifteen and twenty percent of their time working on personal projects presenting numerous initiatives. However, those suggestions typically get lost in the innovation process and never see the light of day.

This loop may make employees afraid to fail, which saps their enthusiasm for taking on new tasks and bringing little back to the organization in return. If your organization has learned anything from inventive ideas, you may overcome the self-doubt by awarding duds. By removing the sense of failure, individuals are motivated to go above and beyond what the administration considers "satisfactory" ideas.

Failure Brings the Chance to Learn from Your Mistakes

We can learn a lot from failure, and the entire process before loss serves as a teaching tool. For instance, the actions you took back then that may not have worked, your justifications for those actions, and so forth, offer a learning opportunity. You can analyze and learn from mistakes when you have the proper perspective and attitude.

Everyone Experiences Failure at Some Point

Entrepreneurship comes with an inherent risk of failure. If you live your life expecting that you will succeed, then failure will come as a shock when it does. But if you are aware that defeat might be looming around all corners, you will be capable of responding swifter and tackling the issues when it occurs.

Your response time will be substantially slower if you don't consider failure. As a result, you may find yourself dealing with a slew of problems at once. This may stifle your progressive motion in the future. Knowing failure might come doesn’t mean it will- it just means you’ll have a process to adapt and pivot if the time comes.

Entrepreneurs might greatly benefit from viewing failures as a task instead of a personal flaw while they are on their way up the entrepreneurial ladder. Every setback is an opportunity to learn and grow. Successful entrepreneurs find their way around several obstacles before eventually succeeding.

Fear of failing is a powerful deterrent to pursuing your objectives and aspirations. We'll inevitably run across terrifying circumstances, and the earlier you remove fear from your thinking, the faster you'll be free to focus entirely on your objectives. Failing teaches you how much you are capable of or when you might need to find someone who can help augment your capabilities. Understanding this gives you the information you need to make better plans and make progress towards your objectives.

Let's look at two examples of people or groups who were unable to achieve their goals. What’s holding them back and what will get them back on track? Depending on the circumstances, they might be penalized or awarded. If a group is penalized for an idea going poorly, odds are they won’t be too eager to pitch their next one. If unfit innovations are met with reward, that is unpacking them to find what might work rather than throwing something away entirely, people will feel valued and motivated to figure out what innovation could work. A workforce that feels they are trusted to go for the big ideas and reach for new heights will be more confident to fall- because they know their leaders will catch them.

Why Failing is a Key Piece on the Road to Success

Some may find this to be contradictory. That should, instead, serve as a starting point for your whole career. Consider this; if whatever you do is successful, are you stepping outside of your comfort zone? Unless you challenge yourself to accomplish huge wins that could distinguish you from the competition, even though you're getting modest victories each day, you're not growing.

In contrast, making a significant change might lead to a tremendous reward. You can provide an intelligent answer for your clients by taking on the risk and understanding that you may fail. The result will be that you'll have a leg up on your competitors.

Failing should be rewarded rather than penalized to foster a culture of creativity and participation. As soon as employees face adversity, they quickly analyze the situation and adjust before trying again. These employees are at the center of the organization's innovations.

How failure can contribute to Individual Growth.

Even if you have a long list of accomplishments and qualities, there is always room for improvement. However, if you didn't occasionally fail, you might not be cognizant of your shortfalls. This means you may not improve and overcome those shortcomings in the future.

For instance, if a business person has poor interpersonal skills, they may lose a valuable customer. Instead of taking offense, they should use this mistake as motivation to avoid provoking customers in the future. They can learn to employ correct terminology and ensure that they keep up all the time. Taking chances that may not work out bring skills such as being humble and empathetic - essential business skills that only experience can teach.

Without Failure, Success is Impossible

"You need to realize that not everything you attempt will be a resounding success. Failure is a byproduct of innovation, so it should not be something that is punished as not to diminish risk-taking and the spawning of new ideas" - Stephen Katsirubas, Chief Information Officer, Information Technology

Sometimes success in business and invention may be feasible even in the absence of failure.  At the very least, defeat in your own hands. You can be inspired to think beyond the box if you read about Steve Jobs’ quest to put a computer in everyone’s pocket. Furthermore, you will be in a more critical place if you accept defeat when it is safe to do so.

Achieving success is the pinnacle of every endeavor. Every member of your team is motivated by the success of both you and your business. Allow them to take significant chances, concentrate on creative team development, and put communications at the top of your priority list, and you'll realize excellent outcomes.

How to Efficiently Reward Failed Attempts

Having a business culture that encourages embracing, celebrating, and rewarding failure isn't something that happens by mistake. It requires systems, attitudes, and mechanisms to support failures and provide space for failures. If you want to improve your business's failure rewarding culture, try these suggestions.

By putting an end to a project or concept, you have the opportunity to learn from it and use its best features in future endeavors. Coming together and recognizing all your innovations, especially the ones that failed, can give your team a great wake-up call. In addition, they should provide a casual opportunity for groups to unite and establish a safe environment where individuals may feel free to try new things without fear of failure.

There should be three things discussed at the failed innovation recognition: what should be kept, what can be identified as a barrier to success, and how can the best idea be integrated into other projects? It is a great time to recognize teammates who took the concept this far and had the guts to reject it.

Make a Hall of Fame for Failed Innovations

This is a simple concept with a tremendous impact. Instead of focusing just on successful attempts and accomplishments, you have the chance to develop a comparable focus on shortcomings in the areas of products, sales, and innovative marketing as well. Combined with Innovation Funerals, this clearly states that failure is acceptable and even celebrated.

You can capture shared lessons under each concept. For instance, the idea's solid aspects and how they now live on in new projects might be described in an editorial. In addition, getting rid of one concept frees up resources for the rest of the project, which may be a smash. An editorial should reflect this emotion. If you want to make your point stick, use other famous failures from history as interludes.

It's rare for companies to squelch new ideas aggressively. Prioritizing efforts is sometimes misunderstood as the same as putting out fires. This, on the other hand, is not the same as putting things to rest. Removing non-essential activities from your to-do list frees up time for the important ones. The ability to accomplish a few things well comes from concentrating your efforts on a small number of tasks.

When making decisions, it's as crucial as deciding what you shouldn't do. It's also a talent that gets better with practice, so get to it! The organization of regular "Kill" meetings in which ideas that aren't delivered are killed rather than merely prioritized. There should be no more than four significant projects in play at any one moment for any given department.

In business, failure is an unavoidable part of the jigsaw. Nobody likes to be the one to take the risk, but those who don't give up after a setback will often find a way to succeed in the field of business one way or another. At Vation Ventures, our team of experts is ready to assist you in building a culture of rewarding failure and encouraging innovation. Ensure you contact us today to begin your organization's innovation journey. 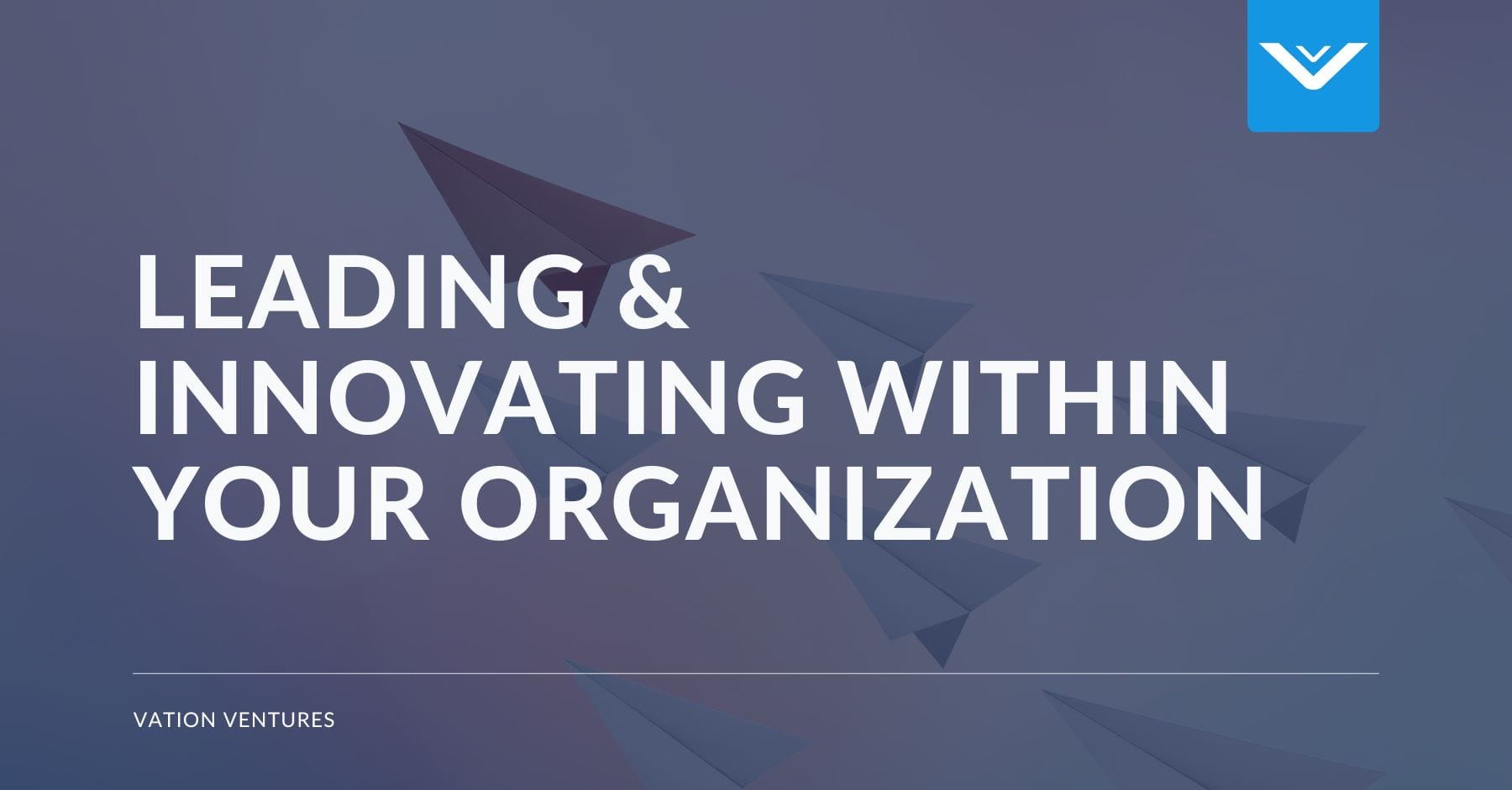 A Guide to Leading and Innovating Within Your Organization

Leading through innovation is crucial to remaining competitive and relevant in a changing market. But where do you start? 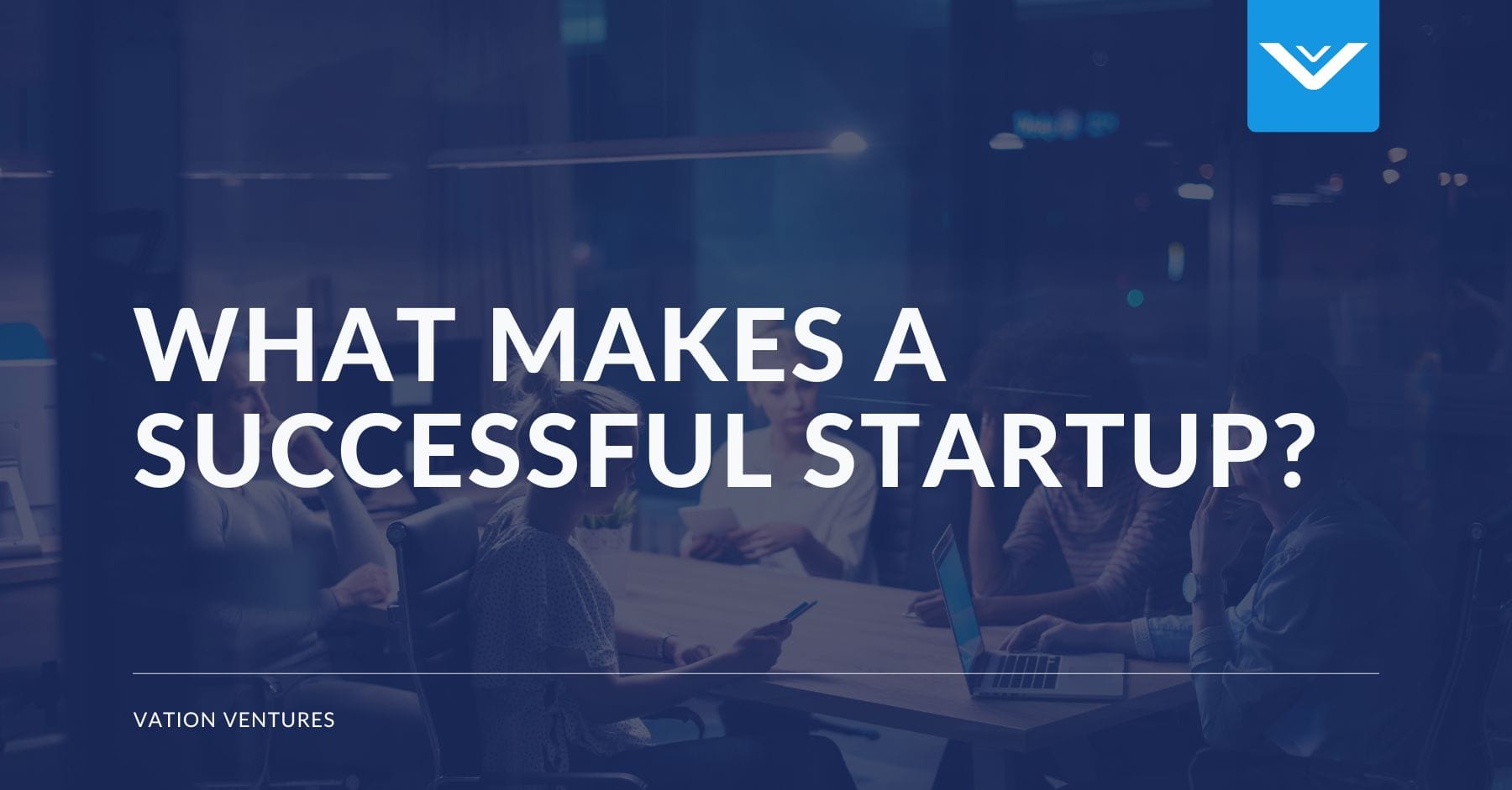 What Makes a Successful Startup?

For a startup to succeed, there are generally three core components making up that success: a strong product, a well-researched go-to-market strategy, and a strong organizational culture. 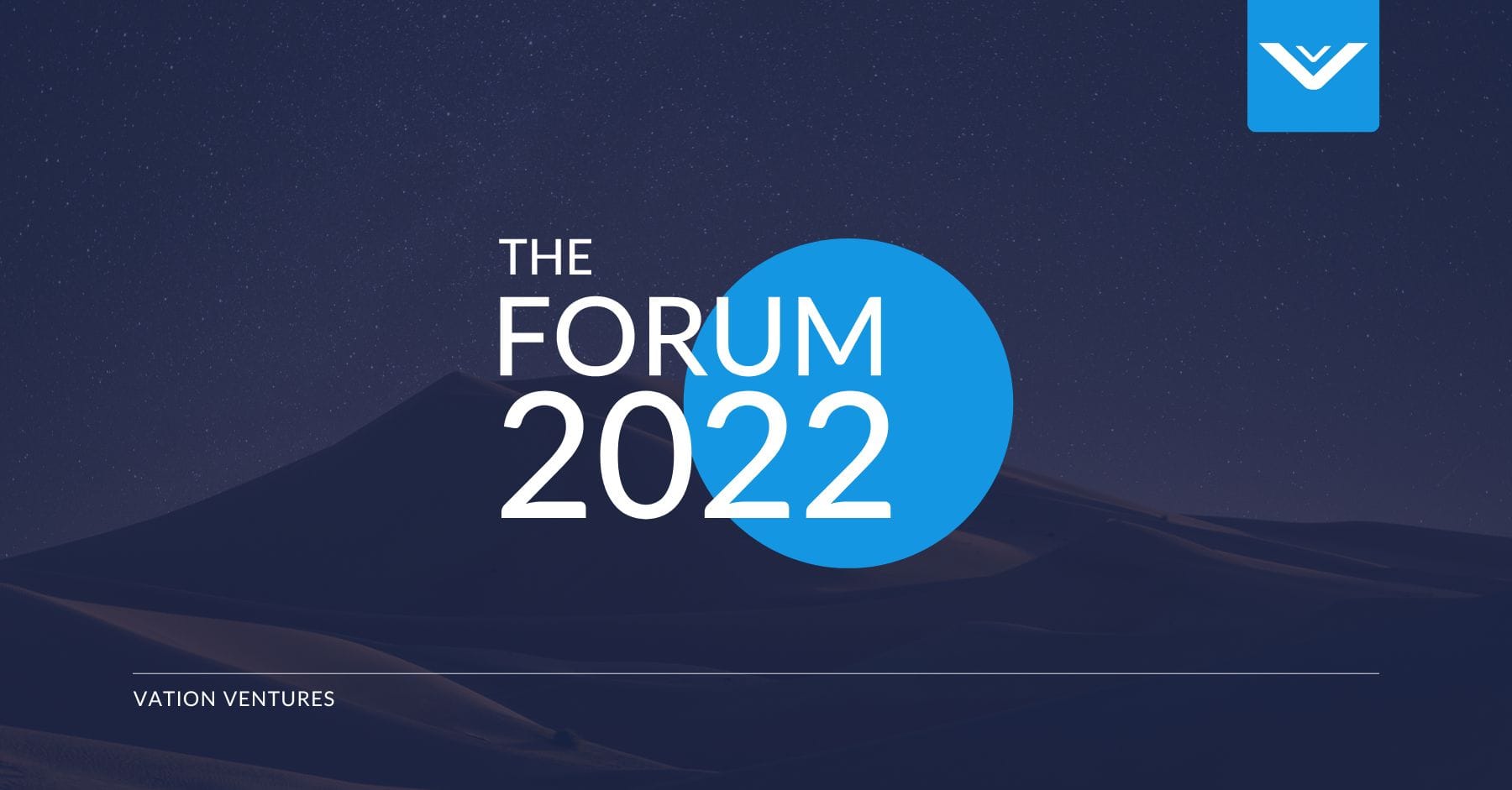 Resiliency as a Driver of Disruption: The Forum 2022

If there's one key idea we can take away from the collective insights at the Forum this year, it's that disruptors are bred from the combination of resiliency and innovation.