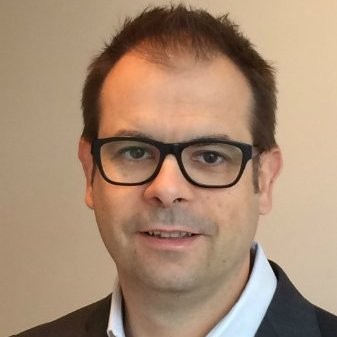 After studying industrial engineering at the Grenoble Institute of Technology in France and receiving a master’s in supply chain and manufacturing management from Linkoping University in Sweden, Francois Estellon started his career as a manufacturing and quality engineer in diverse heavy industries. He soon joined PwC Germany as a senior consultant for a large chemical company’s global ERP implementation.

Eventually he started his own consulting firm, and over the course of five years grew the business into a multimillion-dollar operation across Germany, France, Canada and the U.S. The firm focused on management and IT consulting for asset-intensive industries with a wide range of clients in oil and gas, chemicals, aerospace and defense, and medical devices. The company was sold in 2006 and Francois took a leadership role in the newly formed global consulting footprint.

In 2008, he joined Caterpillar Global Mining, a mining machinery manufacturer, as director for global application, and soon became global CIO for the $5 billion company. In 2013, Estellon joined Gardner Denver, a $2.5 billion private equity owned manufacturer of compressors and pumps for the industrial, energy and medical sector. As CIO for the company, he was responsible for the global IT footprint. Gardner Denver went successfully through an IPO early 2017.

In January 2017, he joined Matthews International in Pittsburgh as CTO in charge of Digital Transformation for the largest division, SGK Branding. In addition to his technology leadership role, on January 1st 2020 Estellon was named SGK Chief Operation Officer in charge of all global operations with a team of over 3000 across 40 locations worldwide.

In addition, Estellon is an advisor for multiple local start-ups active in the industrial space from the Pittsburgh Region. He sits on the Board of the Pittsburgh Technology Council and the Advisory Board for Penn State CODE (Consortium for the Digital Enterprise), a research and advisory group focusing on enterprise integration technologies and applications, supply chain management and ERP systems. He is a member of the United Way IT Council of Greater Milwaukee, a group of IT professionals who have a desire to make difference in our community through contributions, advocacy and volunteerism. Estellon was twice a Pittsburgh CIO of Year award finalist in the Enterprise/Over 5000 employees’ categories and was named a Top 100 Technology Leaders by Computer World in 2016. Finally, he contributes regularly on the topics of leadership in technology using his blog at CIO.com and through multiple interviews, conferences speeches and magazine articles.