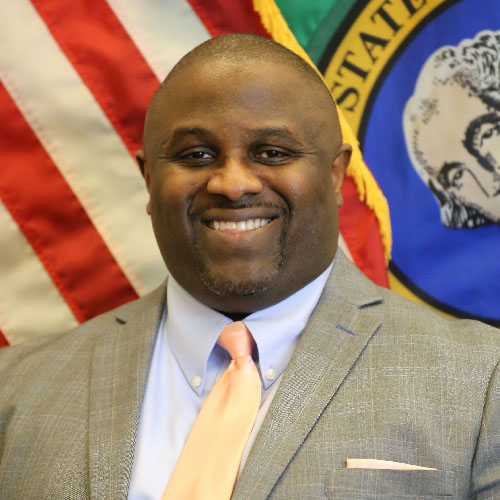 Mark Glenn is a Washington native and was born at Madigan Army Medical Center on Joint Base Lewis McChord as his father was a Vietnam Era Veteran as well. Mark began his service in the United States Army and he served during the Desert Storm Era. Mark is also very passionate about education and he currently holds a Bachelor of Liberal Studies degree and a Master of Social Work degree which make him a proud alumn of the University of Washington, Tacoma.

Mark has been a dedicated public servant for his entire thirty-year career that consists of seven years of Federal government service and twenty-three years of State government service and counting. In 1989, Mark began his career and spent his first four years as a Telecommunications Center Specialist in the U.S. Army. Mark’s military service was highlighted by a one-year international tour in Mons, Belgium at the Supreme Headquarters Allied Europe. After leaving the U.S. Army in 1992, Mark began his civilian career at the VA Puget Sound Health Care System in Seattle. Since 1996, Mark has served the citizens of Washington State working for the University of Washington School of Medicine; the Department of Social & Health Services, the Department of Early Learning and he has served at the Washington Military Department for the past ten years and he is currently the Chief Information Officer and Information Technology Director.