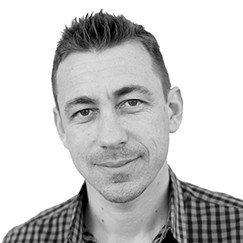 Raphael began his tech journey at 13 when he taught himself to write games on his classroom’s Apple IIc computer.  In high school, he was featured in the LA Times and LA Daily News for helping bring his school into the internet age with the first student body web portal in Los Angeles.

Over the next two decades, he led software engineering efforts in startups and massive enterprises.  He was a founding member and technical architect on CBS’ Enterprise Architecture team and served as architect on their largest software project (over $4bn/yr. in transactions).  In his time at CBS and Paramount Pictures, he architected and led development of over a dozen enterprise applications.

Returning to the startup world, Raphael ran software architecture for Prodege LLC. - one of the fastest growing tech companies in the US (Inc 500/Deloitte Tech 500) where he helped scale the development team from 8 to 40+ members.  During his tenure, Prodege LLC secured $60mil in funding from TCV and grew their membership from 8 million to 25 million users.  He then co-founded and led technology for Fuel – a company providing forecasting and valuation tools for the commercial real estate industry – acquired by RealPage (NASDAQ:RP)